Today I decided that I must change my twitter avatar. Now I know this is rather trivial and a first world pondering, but indulge my little explanation…

My previous avatar was a hybrid between a donkey and an elephant–a donkeyphant. Some have suggested the term elephonkey might be more appropriate, but it doesn’t have the same ring. This avatar was chosen to communicate a fusion of Republican and Democrat ideas. I can no longer in good conscience associate myself with the GOP. This is not because my views have changed so much as those darn elephants stampeding to the right as fast as they can.

I had the displeasure of listening briefly to a GOP leadership press conference today over lunch. I heard the same things I’ve been hearing for the past three years: the phrase “job killing” attached about 50 times to anything related to President Obama, “repeal Obamacare” as a platform plank, and statements about a “willingness to work with the President.” I dare say the current GOP leadership could not give a damn about working with our president! Early on in this Congress they made it clear that the number one goal was to make Obama a “one term president”

This GOP is the party that chooses to hold the credit rating of the United States of America hostage to make a point on the debt ceiling. The point they’re trying to make is that tax hikes for any Americans, particularly wealthy Americans, are unacceptable under any circumstances whatsoever, but extension of unemployment benefits or federal aid to disaster victims should not be passed without a defined method to pay for it that can only be a spending cut.

This GOP is also the party whose presidential candidates are claiming that President Obama is engaged in  “war on religion“. This new Gingrichian statement was, of course, merely a parrot imitation of Rick Perry’s ad stating the same thing. I’m religious…deeply religious…there’s no war on religion being waged by the President or his administration! I do not feel a single religious freedom being abridged by our current administration. There is only one war on religion in this country, and that’s the GOP war on Islam. I don’t even care to debate the merits of this war on a religion; that’s not relevant. Today Islam, tomorrow my religion. Once it becomes acceptable for our government to persecute one religion, then it has become acceptable for our government to persecute any religion—EVEN YOURS!

I could go on for a while, but I suspect you’ve already had enough of my ranting. My point is that I am no longer willing to have anything about my identity, including an avatar, that would associate me with the current republican party. I’m going to try on a new avatar for a little while, a little blue dog that seems only moderately sane: 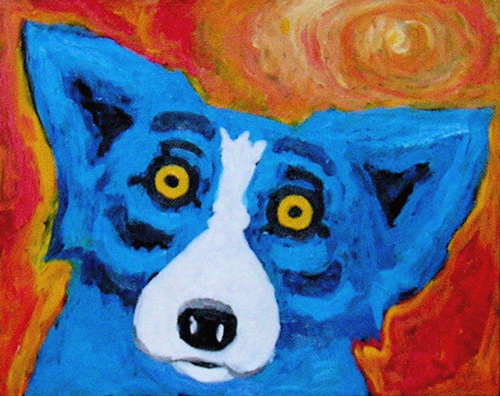 He seems a little glazed in the eyes, which is certainly not an unfair characterization of me. I’m sure it’s obvious that the inference of the blue dog is to a relatively centrist part of the democratic party, the blue dog coalition.

So, I’ll just try this out for a little while and see how I like it.